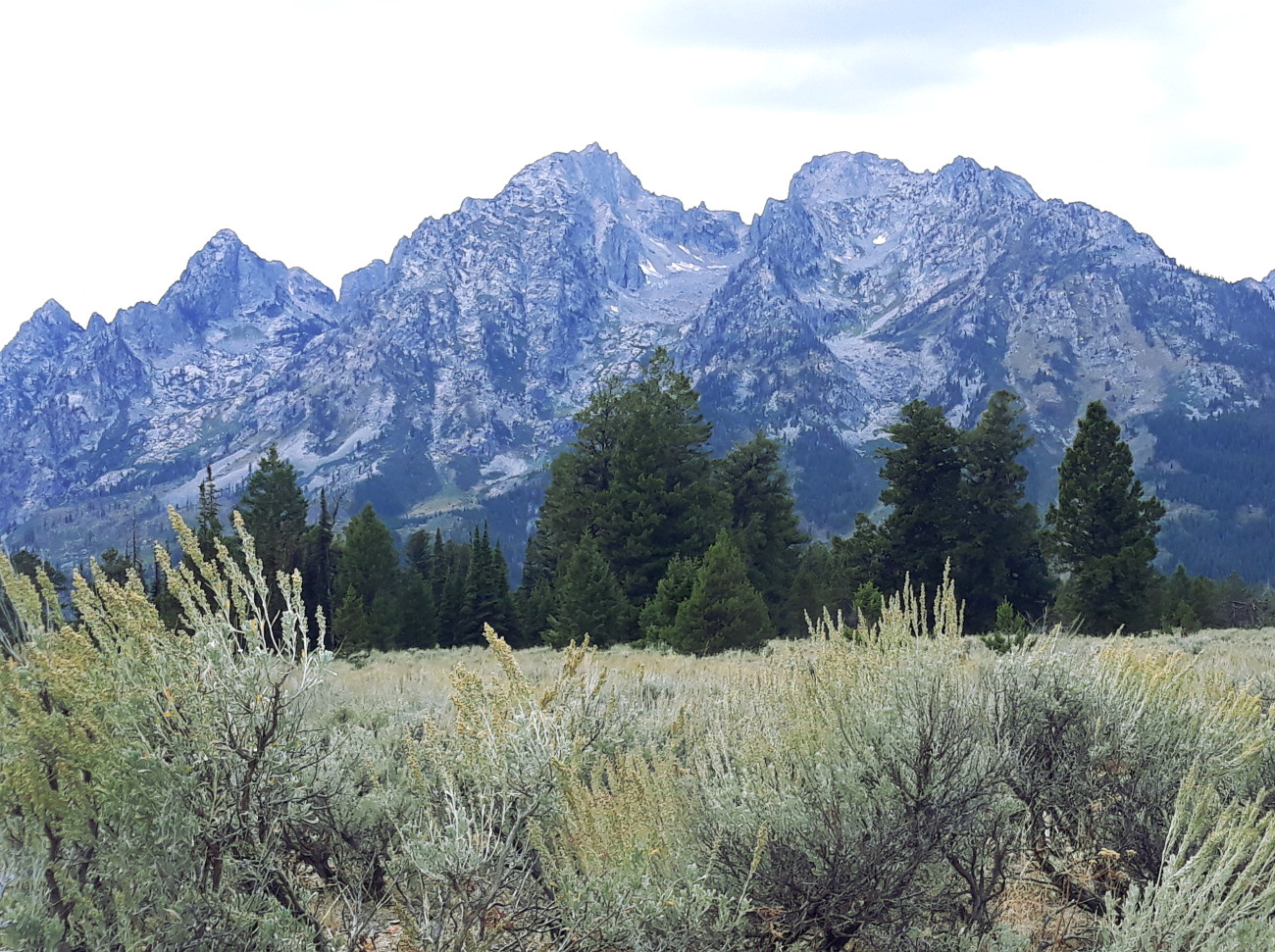 I’m sitting here in my tent as the rain trickles down pattering loudly against the rain fly here in Helena National Park, Montana. I had no plans to be here a week ago when I left Oregon/Washington area, but plans took an unexpected turn. One thing I learned from this trip is to always stay light on my feet, ready to shift because plans aren’t ever etched in stone. Flexibility is key. Allow me to elaborate.

The plan from early on was to make the return trip east with Jef. I picked him up from the airport in Portland, Or on the evening of August 28th. We stayed in a tent on someones lovely property outside of Washougal, Washington which is just north of Portland on the Washington side of the Columbia River. It was a cute spot that I found on hipcamp.com. We took a day trip from here to explore the Oregon coast and surf in Ecola State Park. Yes, the water was cold (50 something degrees), but even in a 4/3 ill-fitted rental wetsuit with booties it was tremendous fun. Of course the fact that the air was in the 70’s on a particularly sunny day, didn’t hurt at all. Being used to Florida windy slosh, less than ideal conditions elsewhere are a-okay in my book, and we got a few fun rides. From the water I could admire the wild landscape, steep mountains were adorned with lush green forest, their rocky feet reached down to the sandy cove flecked with the debris of fallen trees left to become the forest’s skeletons in the sun. A small mountain stream trickled out from the thick forest to meet the crashing waves. I couldn’t picture being anywhere more beautiful.

After returning our rental surf gear and grabbing a bite to eat, Jef, Anuk and I drove south a ways to Oswald West State Park and found a trail down to Short Sand Beach. It was very similar to the many trails I passed on my way north that I wanted to hike but didn’t have the time. So I finally got to explore one! This hike took us through mossy green forest to a hidden cove along the Oregon coast. There were tide pools to explore and the dark rocks along the water were flecked with all sorts of bright colors, lime green, orange, white. Crabs scurried out of cracks in the rock. Did these small caves lead anywhere? The waves looked clean and fun, worth a return trip with a board, and there were several surfers coming and going, making the scenic hike in their wetsuits. I thought I could easily live in Oregon, and what excuse could I make to return? Cold winters aside Oregon was winning me over. Dogs are allowed most everywhere too, so Anuk could join us for all the hiking, beach excursions, and dining out. They even have ‘hitching posts’ outside of some of the grocery stores so you can tie up your dog while you go grocery shopping.

On the following day the three of us explored Hamilton Mountain in Beacon Rock State Park in Washington, not far from where we were staying. The trail wound past a couple waterfalls and many viewpoints until we were just hiking along the top with a clear view of the Columbia River gorge and Oregon beyond. Some parts of the trail branched off into treacherous terrain along a narrow path with a killer drop off, which were more than I could handle with a slight fear of heights and a brave puppy on a leash. Thankfully we realized that the actual trail continued for many miles in away from the dangerous drop offs. We kept thinking we had reached the top of Hamilton Mountain, but found that the path continued upward around each bend, and eventually we just turned around and hiked back down. Anuk managed the eight mile hike really well at three months old needing extra breaks and to be carried up some of bigger rocks that she just wasn’t big enough to get up, but she hiked most of the way on her own. I have noticed that when she gets bored she misbehaves, but when we hike, she rarely acts out. She runs at the chance of a steep incline or decline and I have to hold her back from the ones that are just too steep.

While we hiked Jef and I talked about our relationship and how we both concluded that we just didn’t have a future together. It was an amicable resolution and we decided that we could still be friends and have a great journey back to Florida together. The hike together was uplifting. The scenery was gorgeous, and the exercise was much needed.

The following day we headed out early east along the Evergreen Highway which winds along the Washington side of the Columbia River. Jef had made reservations for us in Old Faithful at a cabin in Yellowstone for Sunday night and camping reservations in Canyon Village on Monday night. We had two days to get there, so we took an easy pace driving to Boise, Idaho on Saturday. There was a campgrounds east of Boise called Macks Creek Park which was right along the river.

When we arrived there early evening, the camp host told us that they were fully booked, but she told us about another spot further down the road beyond the Arrowrock Dam. We traveled down the dusty gravel road a few miles (its hard to tell how far when you’re driving so slow) to the river basin where a bunch of other people had set up camp. It was tricky finding a spot down to the water that wouldn’t totally kill my car, then we later realized there was a road that led right down. The area around the river was huge, it must have been a while since they had decent rain because the water level was pretty low. The mud close to the waters edge was the sticky kind that makes it hard to walk. I’m sure I still have mud stuck into the deepest crevasses of my sandals, a souvenir from Idaho. We picked a spot that was further from the water, it was covered with thin grass and dipped slightly so there was privacy. I imaged this would be the worse place to be if there had been a flash flood in the night, this was clearly the spot the water ran into the river basin. But thankfully we were safe for our short stay. We set up camp, and I made some curry for dinner.

Despite the multitude of cars, campers, trucks and tents set up there was relatively little noise and plenty of privacy. It felt like we were in the middle of a crater, the area was so vast and empty with little vegetation and no trees in sight. We slept with the rain fly off so we could admire the stars. It got chilly, but it was worth it. At this point I had built up some tolerance to the colder weather and didn’t even mind the numbness in my fingers while I took down camp in the morning.

We headed for Yellowstone National Park which stretches from the eastern edge of Idaho into Wyoming and brushes the southern border of Montana. Old Faithful is in the western portion of the park, named after the notorious geyser. So much is built around it and the many other gassy and colorful geysers. Actually there seemed to be steam coming up from all over the place in the park both on and off the beaten track, and the smell of sulfur wafted through the air. Old Faithful is also one of the most popular parts of the park and sadly it was thick with tourists. Jef picked this area because he used to work at the park when he was younger, and he had some glory days to revisit.

It was here, only four days after picking up Jef, that things really unraveled between us. We couldn’t stop arguing, and it became abundantly clear to me that it was foolish to think we would make this trip back together. I know now I had been crazy to think otherwise. That night and following day were about as uncomfortable as you could imagine, but we tried to be civil. We went for an early morning hike; dogs aren’t allowed anywhere in the park outside of lodging, so we left Anuk in the cabin while we took a short hike, then came back and checked out. We headed north to the campsite in Canyon Village stopping at places along the way to take pictures of some of the sights. We got along okay.

The campsite center had laundry facilities and showers. Jef and I took turns showering and moving our laundry through the cycles while setting up camp and getting dinner made. When I returned freshly showered with all of our laundry folded and bagged, Jef tried to kiss me. When I refused him, he flew off the handle saying all sorts of things. I finally stopped arguing back. I had finally learned that if I just agreed with him I would stop stoking the fire, and he would finally run out of things to say. Then all I could do was stand by my car and cry; it didn’t matter to me anymore if anyone saw me in this closely populated campsite. In retrospect, it was funny to watch him try to say what a horrible person and in the same breath thank me for folding all of his clothes.

The overnight low was predicted to be in the 30’s. The bathrooms were gloriously heated. I spent an extra long time getting ready the next morning. I met another camper in there; we talked about her rented camper van and about my recently ended relationship with Jef. She worried about my physical safety, but I assured her that I wasn’t in that kind of danger. It was nice to find compassion from a stranger and a much-needed friendly face that morning.

When I returned to camp, Jef had all of his things packed up and ready and claimed he was wanted to go to the nearest place to rent a car. That place was Jackson Hole airport, and I agreed to take him there. He was scheduled to be at his friend’s wedding in Colorado in a few days.

After we left camp, we actually had a pretty civil day. We stopped at many beautiful spots along the way. The road south leads straight through Grand Teton National Park, one of the most breath-taking mountain ranges I’ve ever seen. Everywhere looked like a postcard; I had to keep saying that this was the real thing, not a painting.

By late afternoon we pulled into the tiny Jackson Hole airport and we parted ways on good enough terms, and I made my way into town to get some provisions. Of course I bumped into him in the parking lot of the only grocery store in town. At that point it seemed like we could be friends. I used the signal in town to look up a campground in the area, and headed back north. Now that it was just Anuk and I, the road opened back up with nearly endless possibilities, and this freedom lifted my spirits. Where would we head next? I’ve always wanted to check out Montana.