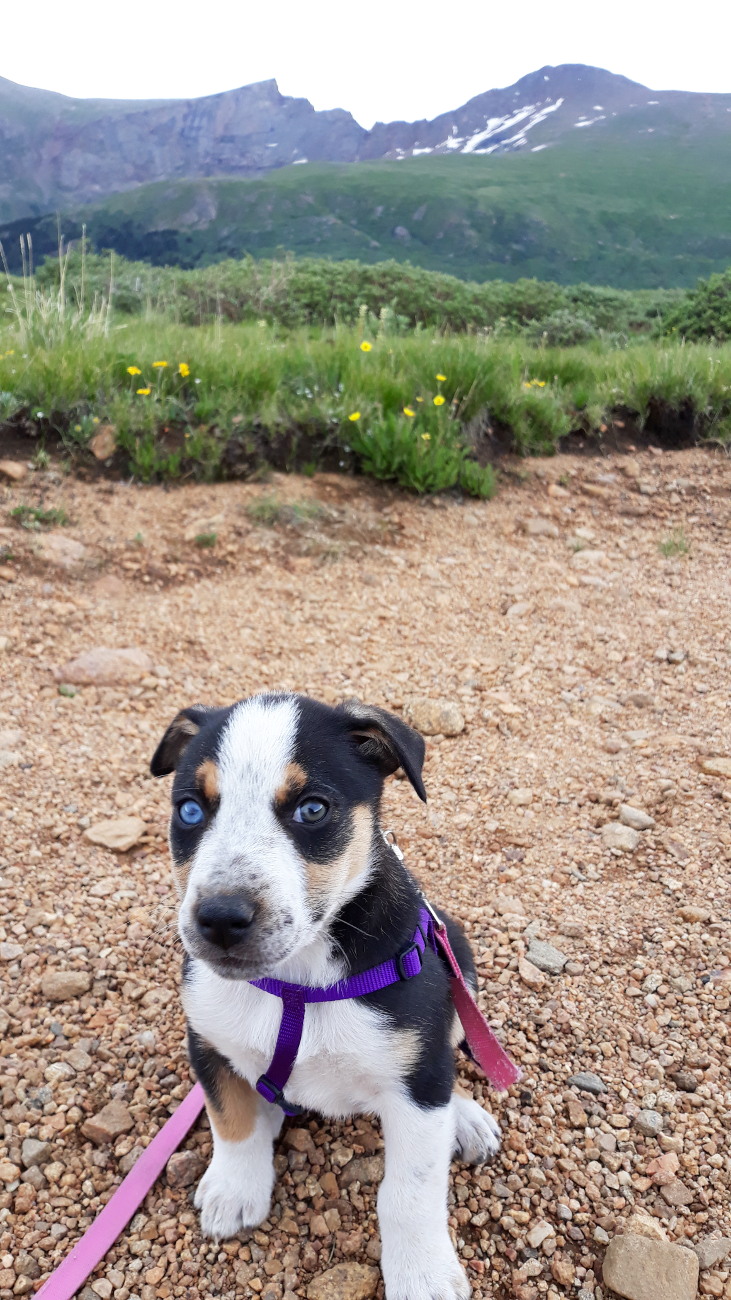 Colorado and a New Companion

On my way back east and north to Colorado I went through Canyon De Chelly, Arizona. It came highly recommended. It may not be as popular and grand as the Grand Canyon, but it was a wonderful stop. There were very few tourists on the same route, but many native Americans who make a living by selling their goods at each of the canyon’s overlooks. It was actually so quiet there that it was a bit unnerving. And there are multiple signs to warn visitors not to leave their valuables in their car due to theft. I made each stop relatively quick for photos. Then I headed into San Juan National Forest near Durango, CO to camp for the night.

I took the scenic route on the next day through Ouray, CO. It is a gorgeous drive with scenic overlooks and trail heads I wished I could have stopped to hike. It was barely safe to enjoy the views while driving and staying on the hair-pin turns. Coco got her work out on all the steep inclines at staggering altitudes. It was a long day of driving as everyone else in Colorado seemed to be out enjoying the weekend and heading home on the same road. I was in bumper to bumper traffic through the infamous South Park. But the scenery was beautiful during the pause, and there was even a magnificent rainbow to enjoy.

When I arrived in Bailey, CO I was immediately introduced to the puppies. My friends that hosted me have a border collie mix who bred with their Aussie Shepperd mix, and the result was thirteen puppies! They weren’t expecting so many puppies and thus were on the hunt to find new homes for them all. Two had already been sent off with family members, and 11 were left to be watered, fed, played with, corralled and cared for each day. It was a tough job, but I managed to help as much as I could. When Joy asked if I wanted one, it was a hard thing to turn down. I think the selling moment was when she said I ought to pick one out before they were all spoken for. Good job with your sale tactics, Joy! I knew that I wanted a female, and there was only one left. She happened to have a blue eye and a brown eye. She reminded me so much of a dog we had when I was little, so it was an easy choice. I still thought the idea of bringing a puppy along my journey was border-line crazy. But then again my whole trip IS border-line crazy. And this was one of those moments when I was reminded of my goal to be open. It was so hard not to be open to a cute little puppy. When I saw her play tug of war with at least 5 of her siblings and winning by pulling the rope around a tree, I knew she was the right dog for me, strong, smart, independent female. That’s my girl!

So I left Bailey on July 29th with a puppy as my companion. I named her Anuk after the daughter in the movie Chocolat. The mother and daughter wandered the countryside together, so I felt the name was suitable. She also calls her daughter Anuska in the movie, which is Russian for Ann (my middle name) and means Grace. Anuk means polar bear in Innuit, and she is most definitely fierce like a polar bear and sweet like grace. I also joke that her blue eye is her fierce and crazy side, and her brown eye is her sweet side. Beware of the blue eye that she never closes, or her teeth that she chomps audibly like a shark! It has been an interesting challenge to add training a puppy along with my day to day driving, camping and farming. As I write this she is sleeping contently under the rain fly of the tent in the shade. She is most excellent at finding shade and a cool spot to sleep, even if she digs layers away to find it.

Our first camping together was in Grand Mesa at Little Bear campground in the National Park. Words fall utterly short of the beauty of this place. The campsite was next to a mountain lake with crystal clear water hemmed in with trees and wild flowers. I really felt like I had seen a glimpse of heaven here. If it weren’t for the hoards of mosquitoes, I would have really thought it was heaven. Anuk was a wonderful camping companion sleeping soundly on the picnic table wrapped up for warmth while I made dinner. And she slept soundly snuggled in for warmth that night. She sleeps on me or very close to me on the cooler nights (most nights camping have been in the 50’s or low 60’s). And she insists on stealing my spot before I get in bed (aka my sleeping bag) or if I get up in the middle of the night, which means she jumps right in with her head on my pillow. When I am in bed, she likes to snuggle her head in so she can rest on my neck. She’s still small enough that she fits, but eventually she will be way to big for this to work. Hopefully by then I wont be living in a tent 🙂

Anuk, my new puppy companion
Getting to hang out with the author of One Million Amelias
Surrounded by puppies each day
Grand Mesa’s beauty
Leash training in Pinella Pass, CO