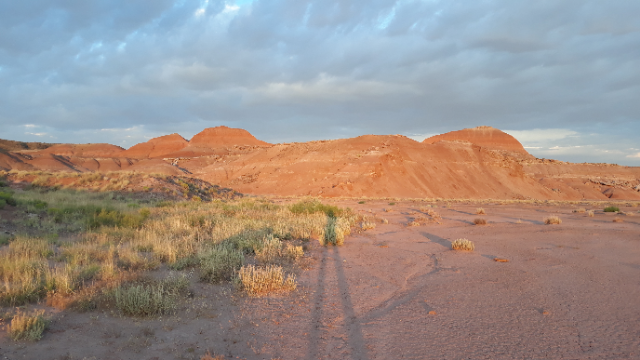 I stopped at the Petrified National Forest on my way to the next farm in Arizona. Backcountry camping is free there just a mile off the trails. I had a rough day on the road, something hadn’t agreed with me and I hadn’t eaten much. It may have been the heat, the changing altitude, dehydration, cramps, who knows. But it took a significant effort to haul my backpack down into the canyon in the heat of the evening.

I wasn’t sure how to judge a mile, I didn’t have any cell service or GPS signal, so I just judged roughly by the amount of time I hiked. This was my first time backpacking alone, and here I was in the Arizona desert in the middle of summer. I parked next to the closed Painted Desert Inn which is on a cliff and its the only building around. I kept it in site to maintain my bearings. I found a little hill on the edge of the clearing to hunker down next to and set up camp. The wind was strong, but it didn’t cool down much. I drank a V-8 and ate 2 and a half snack size carrots. I could barely stomach them, and then I went to sleep at just about 8pm. I slept like a baby, my tent has become my home, and it feels cozy and wonderful as soon as I get settled inside.

I woke up early. I was tempted to roll back over and sleep, but my bladder said otherwise. When I peeked my head out of the tent, I found that the sun was just about to crest over the horizon. It sent its rays over the red rocks in amazing glory. I took photos as soon as I could and even did a little yoga.

The lighting was exactly what I was hoping for on the walk back, and I took as many pictures as I could. The hike back up the canyon was incredibly difficult and steep and my pack felt like 70lbs. After barely any lunch or dinner the day before my body was weak and spent. But thankfully my appetite had returned and I ate a cliff bar for breakfast. I had brought all of my cooking gear, but I could kick myself because I forgot my coffee. Thankfully I had a can of iced coffee in the cooler in my car. That was a tasty reward after my strenuous hike. I repacked my car, changed into a sun dress because I really needed a change and drove onward to Skull Valley.

I paused in Flagstaff on the way and found a vegetarian restaurant called Morning Glory Cafe’. While I was there it started to rain, and a family went outside to play in the shower, clearly it had been a while since they had rain. It was a sweet moment. Flagstaff felt like a green mountain oasis after so much desert. As I sat eating my vegan Benedict, I knew that I wanted to return to Flagstaff.

Skull Valley Lavender Farm was my second farming stop. It poured my whole way there, and I wondered if I was truly finally out of the desert. It had really begun to wear on me. But I left the rain behind when I entered the valley and turned off onto the dirt roads leading to the farm that covered my wet car in dust. Its impossible to keep poor Coco clean.

My host Will showed me around the farm and gave me some time to get situated. Then he invited me to help him harvest lavender. I threw my hiking pants on under my dress and happily followed his instructions on how to harvest the lovely flowers. He said that only a couple woofers had the chance to help harvest lavender, soI was thankful to be there at just the right time.

My time at the lavender farm was exactly what I needed. I started my day with yoga on their outdoor platform, then a restful 20 minute quiet/meditation time with Will and Jake (another guest there), breakfast and coffee while we discussed the plan for the day. Then I would weed the garden or harvest lavender for a few hours before lunch. I cooked lunch for all of us one day and pieced together leftovers another day. And then it was full on rest during the hottest time of the day. It got to over 100 degrees and was literally unbearable in the sun. Then I would go back to work at more of the same tasks in the late afternoon or evening. Then it was wash up and eat dinner together. They have the best outdoor shower! I could shower and watch the sun set over the valley. Will is an amazing cook and master of the solar oven. While I was there he baked banana bread, made a plum pie (with plums from his own tree), and cauliflower steaks.

After dinner I was off to bed at about 9pm. I slept in a tent that was set up in the work shed shielded from the sun, and pleasantly had two single beds inside. It was easily in the 90s there during the day, so I avoided it until bed time. At night it was still warm, so I would go to sleep with just a sheet on and wake up through the night to put on a sweater, socks, a warm hat and warm blanket, because overnight it would drop down to 50 something. Regardless, it was a good nights sleep and a luxury to sleep in a bed.

Maybe it was the emphasis on quiet time, being surrounded by lavender, Will’s calm and approachable demeanor, the limitation on cell phone use, or the even balance of hard work and rest, but I really felt that my soul got a much needed break here. The farm is also vegetarian, dry and tobacco free, which also add to the peace found there. Will is a teacher in addition to a farmer. He shared great stories about his time in China and Taiwan and a methodology for conflict communication/awareness that has been a helpful addition to my life.

When I left Skull Valley I took the scenic twisting mountain route north through Jerome, a mountain side town and also through beautiful Sedona. Will had recommended a lovely vegetarian restaurant and chocolaterie where I ate for lunch. The chocolates were top notch! Then I made a quick stop along the way to get my feet in the brisk river that flows along the roadside. I will stop for water whenever I can. Then I headed to Flagstaff.

I checked into my hostel, which funny enough was located one block away from the Morning Glory Cafe where I had lunch the other day. Little did I know then, that I would indeed be back in that cool city on that very same street. I was eager for some city time, I spent time shopping around before I found a brewery that also had vegan pizza. I spent the evening on their back patio chatting with some other Flagstaff visitors and fellow travelers. Once again, there are great people out there, and when I am emboldened to strike up conversations with strangers, I am nearly almost always pleasantly surprised.